The Ecclesia Is The Good News To The Poor 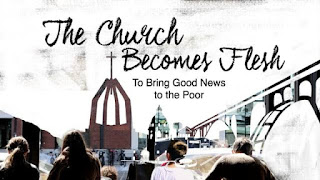 "When he came to the village of Nazareth, his boyhood home, he went as usual to the synagogue on the Sabbath and stood up to read the Scriptures. The scroll of Isaiah the prophet was handed to him. He unrolled the scroll and found the place where this was written: “The Spirit of the Lord is upon me, for he has anointed me to bring Good News to the poor. He has sent me to proclaim that captives will be released, that the blind will see, that the oppressed will be set free, and that the time of the Lord’s favor has come.” (Luke 4:16-19).

We would be looking at the above scripture. The first time I read this scripture I read from the King James Version which puts it way, “The Spirit of the Lord is upon Me, Because He has anointed Me To preach the gospel to the poor;” The question that came to my mind was, "why to the poor? Is the gospel meant for just the poor? Why was the word 'gospel' connected to the poor?"

We were taught that the gospel is for the lost souls. Why didn't Jesus say, "I was anointed to preach the gospel to the lost souls?" I don't know if you have the same questions in your mind as you read this scripture. Why is the poor highlighted here? And why was a strong connection made between the poor and the gospel? It seems like there is something we are missing here. Well, to understand what is truly going on here and what message Jesus was trying to pass across to his listeners (fellow Jews in the first century), we must look at what the word "gospel" means at this period of time.

So what does "good news" mean to the Greeko-roman people of the first century? This good news speaks of a change of government. When a tyrant government has been taken off the throne and a new benevolent king now rules, that's the good news. The word "Evangelion" is used when the former king is dethroned and a new king now sits on the throne. Or when during a war/battle the revolutionaries defeated the incumbent tyrant king.

So when Jesus said he was anointed to preach the good news to the poor, he meant that he was supposed to tell the poor; "Look, I know the present government is terrible. It has done nothing to help the poor. It has ignored you and left you in your misery. In fact, it has even contributed to your suffering. This government's policies are horrible, that's why there are so many poor in the land. But rejoice today, for that terrible government has been removed and a new government has been established. This new government will bring in better living conditions and ease you of your suffering".

No wonder many poor people in the first century swamped into Christianity. Despite the persecution, many were still coming into Christianity because the Ecclesia was a better government. The Ecclesia always takes care of their members, they were always so concerned about the welfare of each member. In the book of Acts we saw that Christians brought their resources and distributed them among one another.

"But as the believers rapidly multiplied, there were rumblings of discontent. The Greek-speaking believers complained about the Hebrew-speaking believers, saying that their widows were being discriminated against in the daily distribution of food.  So the Twelve called a meeting of all the believers. They said, “We apostles should spend our time teaching the word of God, not running a food program. And so, brothers, select seven men who are well respected and are full of the Spirit and wisdom. We will give them this responsibility. Then we apostles can spend our time in prayer and teaching the word.”" (Acts 6:1-4).

Notice that there was a daily distribution of food among the widows. The poor were feed daily. The Ecclesia ensured that no one is starving. The Ecclesia appointed seven deacons to ensure that food is well distributed among the poor. Welfare was the priority of the Ecclesia to its members. It was indeed a better government that took care of her own. When the Jew Christians suffered famine, the Ecclesia among the gentile had to gather resources to ease the suffering of the Jews. The Ecclesia support those in suffering, they make decisions especially in hard times, and they ensure that everybody is taking care of.

This was a government of love and compassion in the midst of a world of hardship and corrupt government. This was why many were drawn to the Ecclesia. Even after the death of the apostles and miracles declined, many were still coming into Christianity mainly because it was a better government.