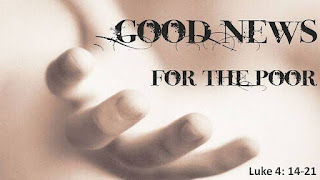 "When he came to the village of Nazareth, his boyhood home, he went as usual to the synagogue on the Sabbath and stood up to read the Scriptures. The scroll of Isaiah the prophet was handed to him. He unrolled the scroll and found the place where this was written: “The Spirit of the Lord is upon me, for he has anointed me to bring Good News to the poor. He has sent me to proclaim that captives will be released, that the blind will see, that the oppressed will be set free, and that the time of the Lord’s favor has come.” (Luke 4:16-19).

We would be looking at the above scripture. The first time I read this scripture I read from the King James Version which puts it way, “The Spirit of the Lord is upon Me, Because He has anointed Me To preach the gospel to the poor;” The question that came to my mind was, "why to the poor? Is the gospel meant for just the poor? Why was the word 'gospel' connected to the poor?"

We were taught that the gospel is for the lost souls. Why didn't Jesus say, "I was anointed to preach the gospel to the lost souls?" I don't know if you have the same questions in your mind as you read this scripture. Why is the poor highlighted here? And why was a strong connection made between the poor and the gospel? It seems like there is something we are missing here. Well, to understand what is truly going on here and what message Jesus was trying to pass across to his listeners (fellow Jews in the first century), we must look at what the word "gospel" means at this period of time.

The original word used here in the Bible manuscript is "Evangelion". Evangelion is a Greek word which literally means good news. But the truth is that you cannot understand what a word mean to a people by looking at it literal meaning. If a performer says to another performer, "break a leg", you cannot understand what he is trying to communicate by simply looking at the literal meaning of "break a leg". If you look at the literal meaning alone you will come up with all the wrong conclusions. To understand the communication you must look at the culture of these people and what those words mean to them.

So what does "good news" mean to the Greeko-roman people of the first century? This good news speaks of a change of government. When a tyrant government has been taken off the throne and a new benevolent king now rules, that's the good news. The word "Evangelion" is used when the former king is dethroned and a new king now sits on the throne. Or when during a war/battle the revolutionaries defeated the incumbent tyrant king.

So when Jesus said he was anointed to preach the good news to the poor, he meant that he was supposed to tell the poo; "Look, I know you are suffering because the present government is terrible. His policies are horrible, that's why there are so many poor in the land. This government has brought nothing but suffering. But don't worry, that terrible government have been removed and a new government has been established. The policies of this new government will bring in better conditions and would cause the nation to prosper. Yes, the lives of many will change for the better".

Indeed, this is the kind of good news every poor wants to hear. When we suffer like this we often cry out for a better government. Look, the Christian gospel is all about a better government. No, not a human government. Human has failed and would keep failing. But the perfect One is here, the truly righteous King has descended into the earth.

We often think the gospel is about how God saved man by dying for us, forgiving our sins and reconciling us to himself. But all that are descriptions of the reality of the kingdom. The gospel is really about the kingdom. Yes, "kingdom" is the umbrella term. Every other thing is either a description of how the kingdom came to be (how God was able to establish the kingdom of heaven on earth) and how this kingdom looks like (how it is expressed or manifested on earth).

All those stories about Jesus dying on the cross, and God forgiving our sins, are really about how God was able to establish the kingdom of heaven on earth. And all the talk about morality and holy living are not really commandments that God gave to the adherent of this new religion. Rather they are a description of the reality of the kingdom. They unveil to us how the kingdom looks like when it is expressed.

"For the law was given through Moses; grace and truth came through Jesus Christ." (John 1:17).

Jesus didn't come to give us the law again. He came to unveil reality. Truth means reality. So when John said, "grace and truth came through Jesus", he meant that the reality of the riches of God's reign came through Jesus. What is the reality of the kingdom? These are what Jesus spent his time on earth preaching and demonstrating through healing and righteousness. If you are expressing this kingdom you will be expressing holiness. But if you are not expressing holiness then that is an indication that you are not expressing the kingdom.

The kingdom is the umbrella word, and that is where the emphasis is. When we put emphasis on other things we would have all the wrong conclusions about what Christianity is. When your len is focused only on the trunk of an elephant, you might think it's a snake in front of you. When you focus on only the leg, you might think it is a tree. But if you can just step back and look at the whole thing you will realize it is an elephant. We have focus our lens on the parts rather than the whole thing, that is why we have very wrong conclusions about what Christian is. But the truth is that Christianity is all about THE KINGDOM COME. For this is what Jesus spent all his time on earth preaching.